Intelligent production paves the way to the future 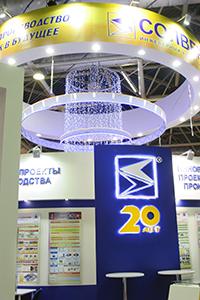 The exhibition “Metalloobrabotka - 2013” that took place at Moscow Expocentre from 27 of May till 1 of June, – has become the significant event for all engineers – both for machines manufactures and for consumers of its production. Solver exposition is yet more proof the status of active point man within the conception of intelligent production and has demonstrated the high potential as an integrator of effective comprehensive decisions for mechanical facilities modernization.

This year Solver engineering company celebrates 20th anniversary. For one part, the anniversary exposition demonstrated the consolidation of company positions on the engineering consulting market, and, – relevancy of proposed solutions and development capacity, for the other part.

The company spent two decades for creation and development of engineering consulting methodology – the unique tool that allows to provide guaranteed efficiency of the projects for production modernization. Nowadays the company has on its balance more than 680 implemented projects; among them – more than hundred large comprehensive programs. Solver booth demonstrated the results of a number of projects that have been implemented by the company for the following enterprises during the last year:

The new standard for intelligent production

This year IMPA KIOSK of production process became the highlight of the booth. This latest research of Solver specialists allows monitoring immediately within the workshop the progress that achieved during the implementation of new production technologies by using the methodology of regulatory systems application that is also Solver knowhow. Their function at the stage of new technologies and equipment implementation – to provide the projects’ goals fulfillment; and at the stage of new production operation – to keep the stable effectiveness of its activity. Today all the company projects are implemented with the usage of these regulatory systems.

At the stage of machine set up for parts production IMPA KIOSK allows to study rapidly the new technological process. All the information - drawings, 3D models, technological processes description, instructions and recommendations for its fulfillment, etc. – is displayed by touching the interactive display. At the production stage IMPA KIOSK assists to control the time of regulation fulfillment, dynamically displaying the amount of time that is left until complementation of the present operation regulation. Moreover, the monitored information of any operation progress on each machine is also displayed in color and numbers on the control monitor of the head of the workshop, reflecting the true image of working state in the workshop – the type of operation the machine carries out from time to time. Green or yellow color indicates that all is in order, red – «attention! », black – «malfunction, necessity for making a decision to eliminate the problem ». One glance is enough to evaluate the situation in the workshop.

This know how caught a lot of attention as the influence of human factor on the technological process progress is the matter of many manufacturers concernment. 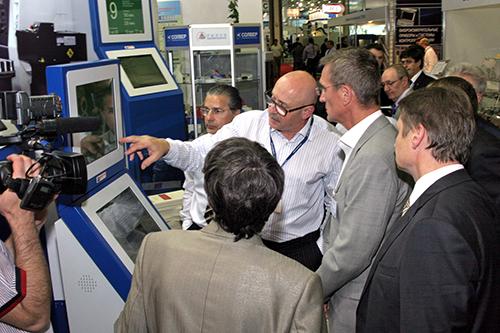 If during the last exhibition Solver has only declared about the obtained competencies within robotization production, this year the company demonstrated sound consolidation within this direction. The new department «Solver Robotics» has been created in cooperation with the Belfingroup Company during the last year. The projects of robots implementation in customer production have been carried out. Among them –automatization and robotization projects, performed by Solver at “Aviadvigatel”. The film with this project implementation of unmanned technologies on the domestic enterprises has been aired on all screens of the booth attracting visitors’ attention. 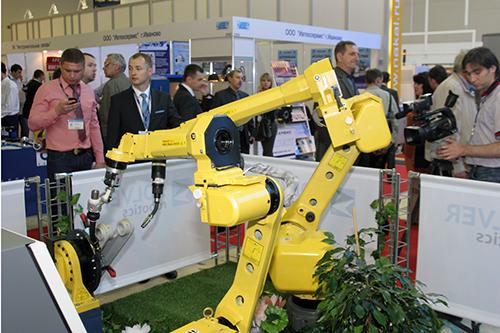 The modern production is noted for the capacity of rapid production rearrangement to the new products manufacturing. It might be connected with buying and integrating the new machines into the present production capacity, with building new production from the ground up or with optimization of existing production structure. Industrial construction kit performed by Solver specialists on the exhibition allows studying the workshop layout rapidly and with high quality.

The models of the machines and accessories, walls and divisions, produced by rapid prototyping Stratasys system from ABS plastic material on a scale 1:100 and equipped with magnets, are easily moved along the metal surface with applied array. Such an experimental model-stand with its demonstrativeness and easy handling allows to facilitate workshop laying -out and reconfiguration process, to account many marks, that are often missed during work with 2D drawings and layout designs. Therefore, industrial construction kit will become the effective tool for the heads of enterprises during modernization of present productions, designing the new ones, and at investing projects defense. 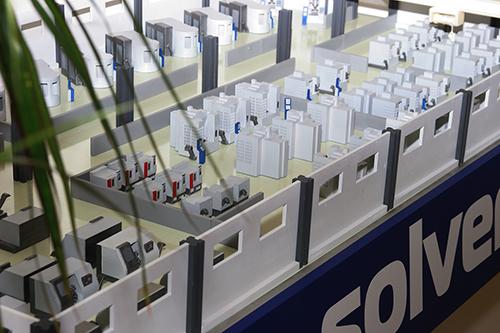 Industrial construction kit – is a “chess set” for engineers

Advanced training of specialists of machine-building enterprises and young specialists for the specific needs of the customers – traditional direction of Solver business. «Recruiting agency of production modernization» that has been presented at “Metalloobrabotka” last year in cooperation with leading technological universities of our country trains young specialists for machine-building sector. The new production and training center with large areas, modern equipment and training classrooms has been put into operation in November of last year. Today training of specialists in this new center is in a full swing. The specialists of the following enterprises have already been trained on the base of Recruiting agency from the beginning of this year: 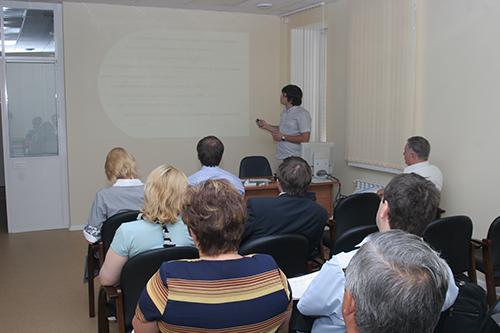 The phrase “intelligent production” became familiar and widely used synonym of optimally organized and effective production. It is a unique landmark, goal, model, pass to the future, where we want to live , work and create. And Solver keeps it well in hands. Join us!

You did not fill in all the fields