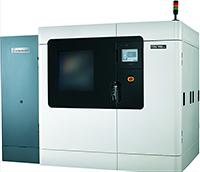 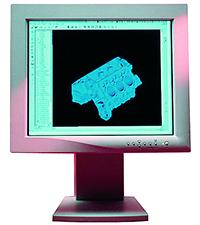 Equipment for Rapid Prototyping of Plastic

A path from the idea to the product should be the shortest. Application of rapid prototyping (RP) allows increasing the efficiency of design and engineering production planning.

During new products development there is always a necessity in experimental models, or so-called prototypes of a product, its separate elements and assembly units.

Nowadays a lot of industrial enterprises use FDM Technology for prototypes production. This technology is designed by American company Stratasys, the world leader in RP equipment market.

According to FDMTM (Fused Deposition Modeling) technology, prototypes creation principle lies in layer-by-layer deposition of a fused polymer filament in accordance with the geometry of a part mathematical model, developed in CAD system.

Mathematical model is passed in STL format to the special Software InsightTM or CatalystTM (ОС Windows XP, 2000, NT 4.0), which regulates the operation of FDM equipment. The software orients a model for building in the optimal way, divides it into horizontal layers and estimates the travel paths of the head, which places the filament. If necessary, the program generates supports required for overhanging model parts.

Modeling material is fed through the basic extrusion tip of the head. The second extrusion tip is responsible for sup-port production. As a result, sequential layer growing forms the prototype. 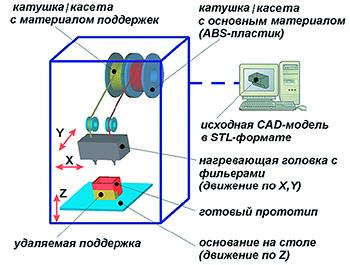 One can produce several parts simultaneously, if they can be accommodated inside a working envelope of the equipment. The prototypes, whose dimensions exceed the working envelope size, can be modelled part by part and then assembled.

The simplicity of modeling using equipment designed by Stratasys company allows reducing the prototypes production time to several hours (depending on model size). Finished model can be used right after building, for it does not need long subsequent finishing.

Thanks to safe technologies and pollution-free modeling materials, Stratasys equipment operation does not require special conditions. This equipment is normally placed in Design Department offices near the engineers' desks.

Accuracy of prototypes production on Stratasys equipment runs up to 0.127 mm, which can be compared to the accuracy of plastic parts made in usual injection mold. 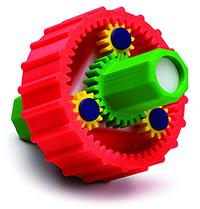 FDM equipment works with various modeling mate¬rials: ABS and "medical" ABSi plastics, РС and РС-ISO polycarbonates, mixed PC and ABS plastic, PPSF polyphenilsulfon. These materials advantage lies in their usage in manufacturing of finished products, which ensures pro¬duction accuracy, structural strength and thermal stability of the prototypes and prevents them from deformation, shrinkage and absorption of liquids. These modeling materials can be used for assembly of functional prototypes, capable of bear-ing actual forces.

The equipment standard accessory is ABS of white color, but you can also choose any of 7 colors offered by the company or choose any other color -depending on the customer's wish. In comparison with ABS, РС is characterized by high tensile strength, flexibility and rigidity. Besides, РС and PPSF models are more stable, have higher heat distortion level and durability, which makes it possible to use them in low volume manufacturing. ABS models keep stability at up to 930С, РС models - up to 1250С and PPSF models - up to 1890С (!). РPSF is resistant to antifreeze, motor oil, gasoline and acids. PPSF and ABSi are certified by the Ministry of Health of the USA for medical purposes usage.

After production process finishing one can easily remove support elements from the model - mechanically or by washing them out in an ultrasonic tank filled with special water solution. Technology, which uses water-soluble support, is called WaterWorksTM. This technology is used only by Stratasys company and is implemented almost in all equipment designed by Stratasys. Models built with this technology are smooth, with no scratches or surface marks, and with all the small details kept. WaterWorksTM provides virtually unlimited possibilities to prototype shell-type parts and parts with complicated inner cavities.

There's no need for the operator to con-trol the modeling process, so the equipment can work at night time and weekends. When the building is finished, the equip-ment forms a message to send by e-mail. The machines are compact, simple and cheap in maintenance: they have no lasers or jet heads, and their mechanical drives are designed for a long term operation.

RP technologies are applied both by industrial leaders and by small businesses. That is why Stratasys offers a wide variety of prototyping machines – from 3D printers, which even small companies can afford, up to high-efficiency machines, capable of building enormous parts with the dimensions of up to 600 х 500 х 600 mm (see tables). 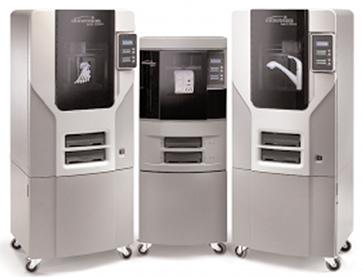 According to Wohlers Report for 2006, Stratasys company occupies the 1st place in the world for the total amount of the machines sold. According to Stratasys, the ability to produce functional prototypes, wide variety of modeling materials, safe design, wide range of models and reasonable prices account for grow¬ing popularity of these machines.

3D printers Dimension™ are com¬pact, easy to use and maintain. According to Wohlers Report for 2006, these are the 3D printers with the world's largest sales volume. In January 2007 the release of a new model - Dimension™ Elite - is started. In comparison with other models of the Dimension™ series, this 3d printer is capable of building shell-type parts with thinner ribs and better surface quality. Besides, it uses ABS plus, the new modeling material, which is 40% more rigid and structurally strong than the usual ABS.

FDM Vantage™ machines series has a range of capabilities and accuracy of production class. It also has one more feature its owners are interested in: in order to reduce the initial investment, one can purchase the basic model VantageTM i and upgrade it to any of the more perfect models of this series. Moreover, this up-grading can be done straight at the customer's. Thus, upgrading of Vantage™ i to Vantage™ Х allows applying the wide range of modeling materials. Transfer to Vantage™ S with all the capabilities of Vantage™ Х kept will increase efficiency for up to 50%. The most perfect model VantageTM SE will possess the largest work envelope size and the greatest amount of modeling materials types (see the table). 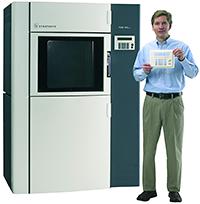 FDM Maxum™ is the largest and most efficient machine in Stratasys model range. It is used most effectively for build-ing of large dimension parts (machine picture is given in the beginning, p.80) 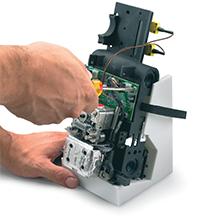 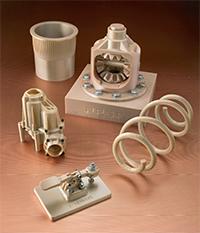 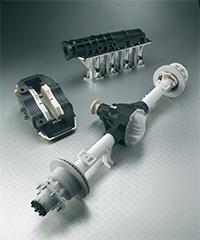 Stratasys equipment for rapid proto-typing is actively used by world's industrial leaders in car, aviation, medicine, readioelectronic industries, and by home appliances makers. Prototyping machines help them to reduce noticeably the time necessary for model range renewal and thus guarantee the success in competition. These are the leading companies in their fields:

To evaluate the quality of FDM-made prototypes, SOLVER specialists can build a test model for you according to your STL-file.

You did not fill in all the fields